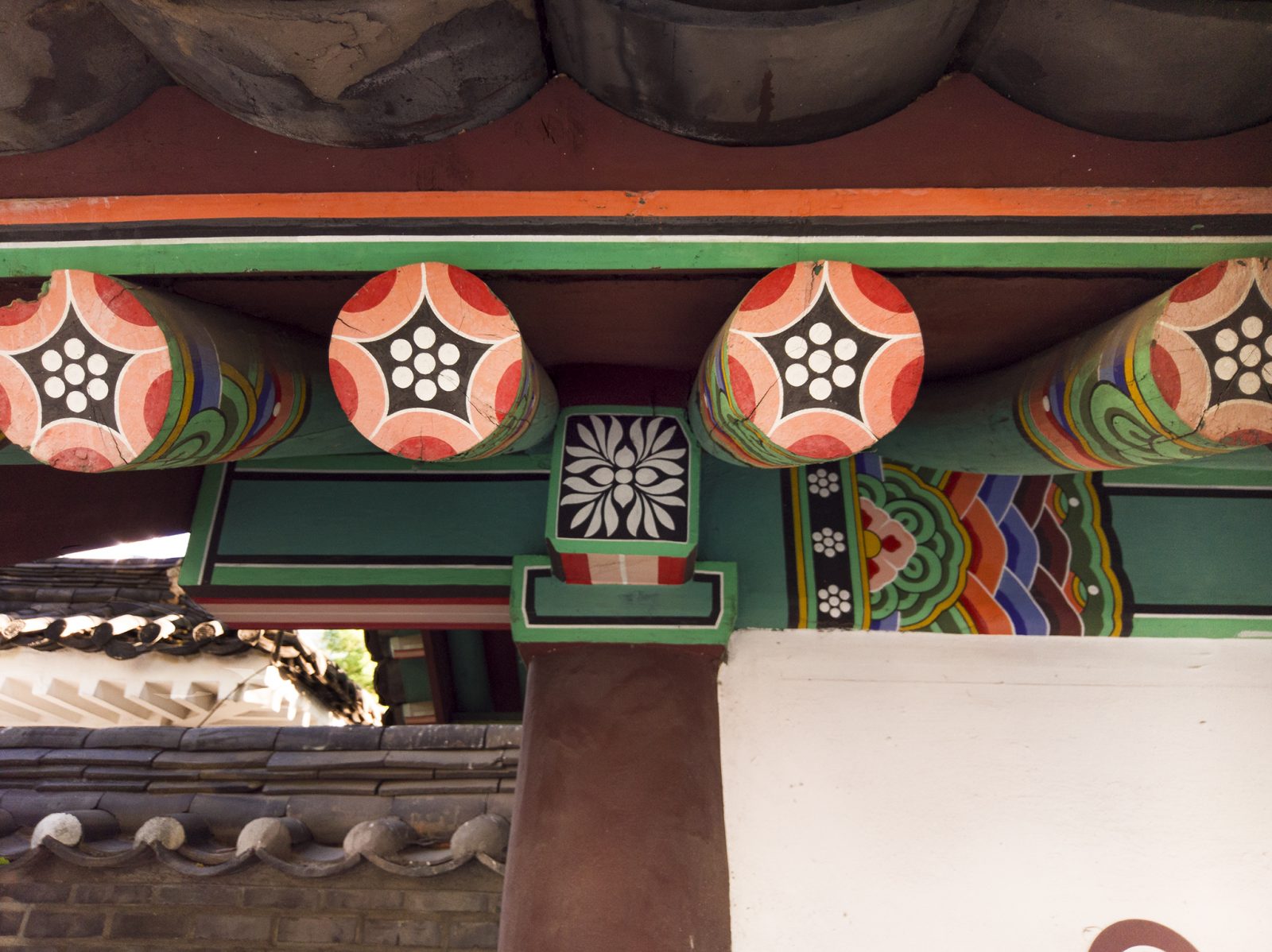 The day broke bright and sunny, with not a cloud in the sky.  We had brought the rains and they had flown away just before our scheduled departure.  Three hours to capture as much as I could of Seoul with my smartphone.  First was to walk back along Jong-Ro from where I had spent the night towards Sejong-Daero.  To the right the park called Tapgol, for the old pagoda that sits at its heart, and where in 1919 Korean independence was first proclaimed against the Japanese occupation.  At this early hour the park was closed, so I could only get a glimpse from a gap in the ornamental gate.  Here I first noticed a pattern to traditional buildings: timber beams, hewn straight, sanded smooth and painted in bright colours both along their length and at their ends.  Similar to the brightly coloured beams in Buddhist temples of SE Asia, but somehow more simply, and endearingly, done.

On then while Seoul woke, past the small clutter of stones that mark where the main market once stood four hundred years ago, past the rebuilt, blood red Bosingak temple with its high balconies, great bell, and steeply curving roof, past the smaller monument celebrating the fortieth year King Gojong (and first Emperor) had been on the throne, with a red and blue um-yang disc mounted on its sturdy iron Mansemun Gate, so small beside tall modern buildings that crowd up on its perimeter as to be almost invisible.

From this corner I headed right onto broad Sejong-Daero, bypassing the statue to Admiral Yi Sun Sin for a moment to walk along the central concourse called the GwangHwamun Plaza, easily identified by the golden statue of Korea’s great king Sejong, seated as it is on a great stone plinth with his name carved boldly into one of its flanks. The sun wrapped its light around the statue, making it a shining symbol of Korea’s own unique identity, even if much of its culture is commonly shared with its neighbours. Behind the great statue and the six pillars that celebrate the Hangeul way of writing he introduced, beyond that a long strip of lawn with flower beds. Below high hills that looked startlingly close to Seoul, stood the royal palace of GyeongbokGung,  The great entrance gate to the palace is cut off from the visual harmony of the wide avenue by an unending stream of vehicles that courses in front of its walls – and this was Saturday, at eight in the morning!

It was easy enough to walk through the high GwangHwamun Gate with its painted ceilings; the guards did not seem to pay any attention.  Yet walking through was to walk into a different world.  A great bare courtyard lay in front of me, with low buildings left and right, and a second, far more imposing gate, the HyeungNyemun, in front of me.  Through the middle of the courtyard, from one gate to the other, ran a broad flagstoned path, no doubt the one along which kings, lords and envoys once strode, rode or were carried in a palanquin.  Local families and visitors like I were already ambling along the stony concourse, cameras in hand.  Beyond the second gate, all red and gold with touches of sky blue and leaf green, across another courtyard, lay the royal residence.  I could only glimpse at it, for time was not with me: this section of the palace-now-museum opens to visitors at 9am and I could not wait.

Back over the torrent of trucks, buses and cars, along the broad avenue, past the US Embassy, past King and Admiral, past the frozen blue tsunami that is City Hall, and on to the SungNyemun Gate.  For this is Seoul’s most famous gate, the one through which the road south lies (which is why it is also called NamDaemun, literally Southgate), to rest of South Korea that once was the kingdom of Joseon.  This is the gate that famously burned some years ago, its timbers lit aflame by the hand of a political extremist.   Now time was short; I could but find its entrance, thank the guardian for letting me in free, take two back-and-front fotos before the battery ran out on my smartphone.

On the way to the Plaza Hotel to meet up with the others I did look for some sort of tourist store, but other than a couple specialising in Korean chocolate, there was nothing.  No matter I thought, there will be some shops with good traditional (and less traditional) Korean goods at the airport, expensive though they likely would be.

I was destined to be utterly disillusioned.  To the sound of Hollywood movie themes being played with traditional Korean instruments, the only shops in evidence were the ones you find all lined up together along Fifth Avenue, Bond Street and Place Vendôme.  No Korean art, no Korean clothing, no good Korean photo-books, no understanding and no help.  As the yellow-and-orange man with the long red tie says, sad.  The five remaining members of our company: Steve, John, Gboyega, Mike and I gave up on the shopping and went for a celebratory drink of beer, courtesy of Steve (thanks again Steve!)

To London where the Fellowship forges paths anew

The flight was a replay of the one a week before, right down to the food and the in-flight movies.  This time we were chasing the sun, so once the clouds dissipated over Manchuria every glance I took told me we were travelling over Siberia, the Urals and Muscovy.  I think at one point I caught a glimpse of silver that was the northern shores of Lake Baikal, but it may just have been an illusion.  On the ground, through controls (glancing back at the long, long queue of non-EU travellers knowing that will be me too next year), lined up at the baggage serpent, the last of the company went there own ways.  Mike found his bags first and with cheery wave headed off.  John was next, once his big bag turned up.  Gboyega and I had already found ours but we waited for Steve’s last bag to appear before we headed off, Steve to meet his friends, me to leave Gboyega on the Piccadilly line as I jumped off at Hammersmith.  What an adventure!

A Note of Thanks

I thank and congratulate the entire SMMT team for what has to be the best thought out, planned, structured and executed program I can remember, personally and professionally.  Having been at the same end a couple of times (for much shorter events) I know full well how difficult this is to put together – and then get right. This was a truly memorable time and opportunity for which I will always be most grateful. The value of being able to get insights into Korea is immensely useful. I’m sure it is a good solid first step into a substantial market, one to which Silent Sensors’ products and services seem to be most suitably appropriate.

The balance of events and meetings was pitch perfect for the group as a whole, as you saw.  Silent Sensors walked away with sixty contacts, six leads and two opportunities.  I found opportunities to explore with our fellow participants and many ways by which we can all help each other in matters such as grants, investment and resources.

Thank you Jiyoung, Alessandro, Ruta, Matt and Mike for the very personal, informal and friendly way the entire event was handled from beginning to end.