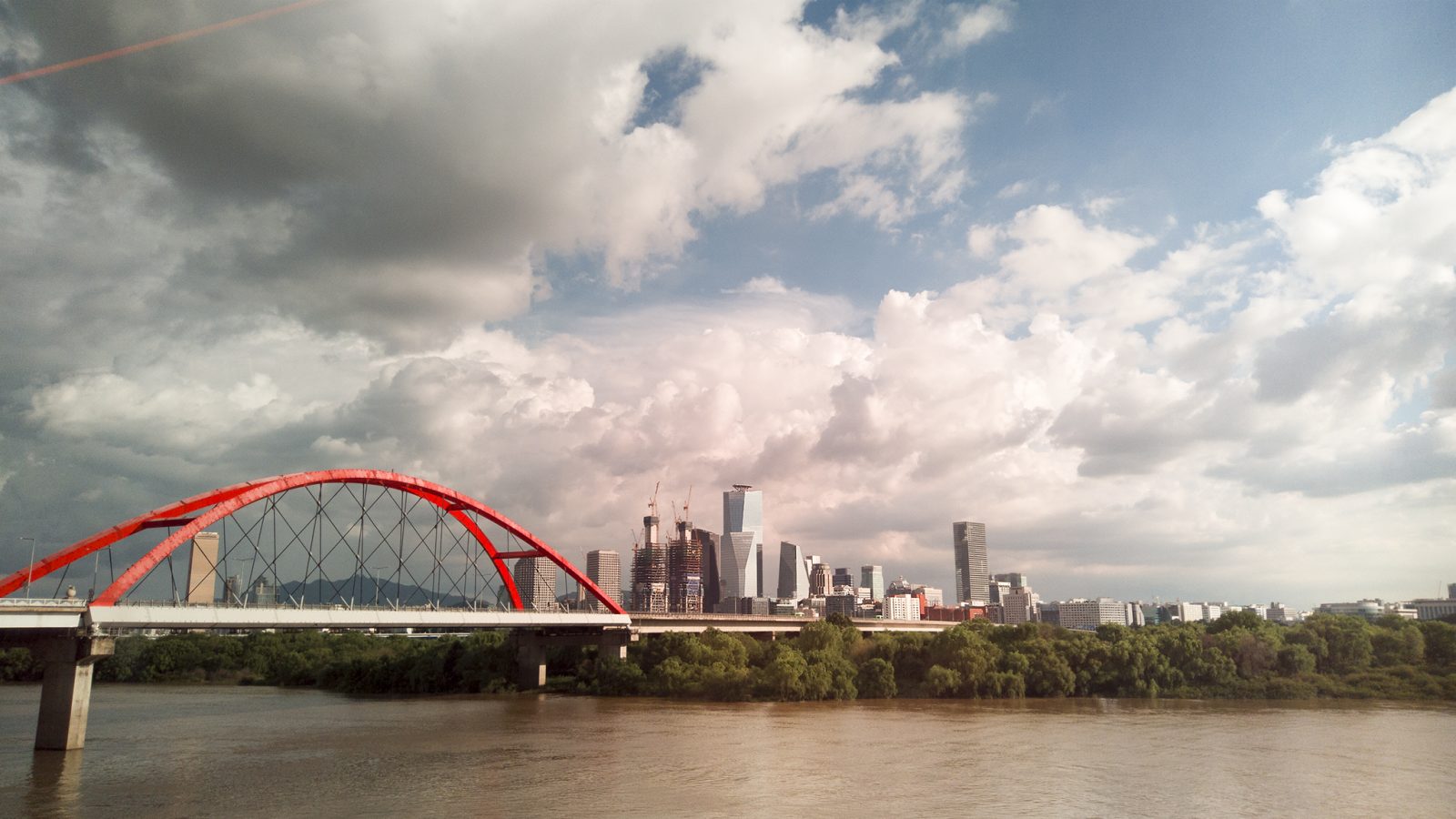 A view towards Seoul from the south side of the Han River.

July 4th
KIAPI, DaeGu Forum and on to GwangJu

Early start again, for today we were to check out of the Plaza Hotel and take the train from Seoul to Gimcheon and from there meet up with our battlewagon coach to travel on to Gumi to meet with KIAPI (the Korean Intelligent Automotive Parts Institute).  The KTX train was what I suppose everyone expects trains to be in East Asia: fast, quiet and comfortable.  The country we passed through was very much the same as the day before: few plains, many hills, broad rivers.  Untrammelled nature punctuated by serried rows of high rise dwellings.  I could not see any significant agricultural exploitation at all: no broad fields of monoculture wheat, no terraces for growing rice, no pastures for cattle.  Such flat land as there is was settled on, yet there were no villas on the hills to gaze over vales, as there are in the Philippines.

Every country has its own cultural history; Korea was proving most interesting. On the way to Gumi Matt Smith of SMMT and I had discussed Korea’s climate, with Matt saying it reminded him of northern California, while I was thinking of middle Germany.  Surprisingly Seoul is the almost same latitude as San Francisco, so Matt was quite close.  Compared to Europe Europe Seoul lies on the same latitude of Catania in Sicily, so I was way off. That makes sense for the summer, but not the winter, with its icy winds and regular snowfall, which blow over from Manchuria.

We were in the south eastern part of South Korea now, so the heavy, humid heat was more apparent than in Seoul.  Our SMMT bus brought us to the steps of KIAPI.  We met with several KIAPI managers, to whom we all gave a short presentation, after which we toured their building.  KIAPI is another testing facility much in the same manner of Horiba MIRA.

With the ritual photo-shoot taken on the front steps I thought that was it, but to everyone’s surprise we were asked to get into several cars; in my case I shared with John Sellors.  We both thought we were going to be driven to another building.  Some distance along a long road the driver veered onto a trackway and then all was  clear: we were in the testing grounds.  Fast driving and high curves, rugged roads and roads with concrete half waves alternating either side that made you feel at sea, showers and plunge pools (we avoided that last one).  Ten minutes later we were all suitably shaken up.  Maybe this is a novel negotiating technique?

Handshakes and many smiles later, the SMMT battle-bus was a haven for joggered bones.  Off we headed, to the centre of DaeGu, where we had been invited by KIAPI to attend and give a presentation to various dignitaries and an audience of engineers at the DaeGu Automotive Industry Forum.  After a sandwich lunch we sat together, with notes in hand and presentations loaded into the organiser’s computer.

We met briefly with the city’s Deputy Mayor, senior personnel from KIAPI and sundry dignitaries.  By the time we were to speak much of the audience had left the conference room.  We all did our stand-up.  I linked Silent Sensors to the name of the organiser KIAPI, saying that what the company did was to make auto parts intelligent, and then showed them a video, which you can see here.

After the presentations we all went back to a nearby room, which had been transformed like the one in the British Embassy into seven tables for the seven companies.  Here we were to meet anyone interested in knowing more about the various products we had on display.  I met with two companies; maybe something will come of these encounters in the future.

It was time to leave DaeGu, to head to our next destination, GwangJu.  This meant another long ride in our SMMT coach, through the eternally hilly and often challenging countryside of southern South Korea.  Many hours later, the light fading, we pulled into a dusty forecourt, on the further side of which was a low building and a sign heralding the place to be a restaurant, with a placard set in front to welcome us all.  We would eat at a traditional Korean restaurant.  Lovely!

We were met by Hannah from the British Embassy, who as it turned out would sit next to me at dinner and tell me about what we were to eat.  First we had to take off our shoes and put on light slippers, so the eating space remained clean.  Very sensible.  Our hosts were the Mayor and other select luminaries of GwangJu itself.  Local government is very evident in promoting inward investment, as we saw in DaeGu.

Welcoming speeches given, toasts raised, dinner began.  Many dishes, an eclectic mix of meats and fish and vegetables, all brought in small bowls.  Interestingly, just like the first dinner in Seoul, rice was not automatically served.  Another distinctive feature of Korea.  The result is that you can eat from many small dishes, feel sated and yet not feel over-full.  Two special plates deserve mention: an extremely pungent salty fish, and ‘winter’ kimchi, a much more dense a flavour than its ‘summer’ equivalent.  This was a good hearty meal, washed down with Cass beer once more (and some Soju further up the table).

We all shook hands and waved goodbye as we boarded, not our luxurious SMMT coach, but an altogether more colourful affair that would take us to the Holiday Inn in GwangJu, where we would stay two nights.  Check-in, after-dinner drink, then bed.